On 12 April 2019, the headquarters of the Port of Bar, Montenegro hosted a dissemination event on Inter-Connect to raise awareness on the project’s objectives and activities at a local level.

The students noted that the main obstacles hindering public transport regard:
 poor transport connections in the region (Montenegro is only connected to Serbia by passenger railway transport, there is  a connection with Albania but the passenger transport is not established)
 occasional delays (even in short distance transport such as Bar – Podgorica ~50km, railway passenger transport is not reliable, there are significant delays or cancellation of train departure, etc.)
 poor maintenance of public transport vehicles (wagons are outdated in most of the cases)
 insufficient investments in transport infrastructure and in new, modern trains (railway infrastructure is, in general, in poor condition compared to transit times of modern trains in Europe)

They agreed that intermodality vision could be achieved only with strong and dedicated actions. In addition, it was noted that habit of using private cars could be changed, but such activity takes long time and lot of investments in railway infrastructure and also in modern trains to support this modal shift. 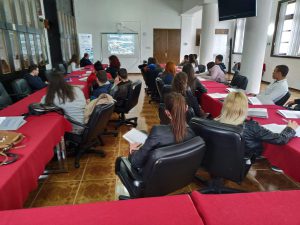